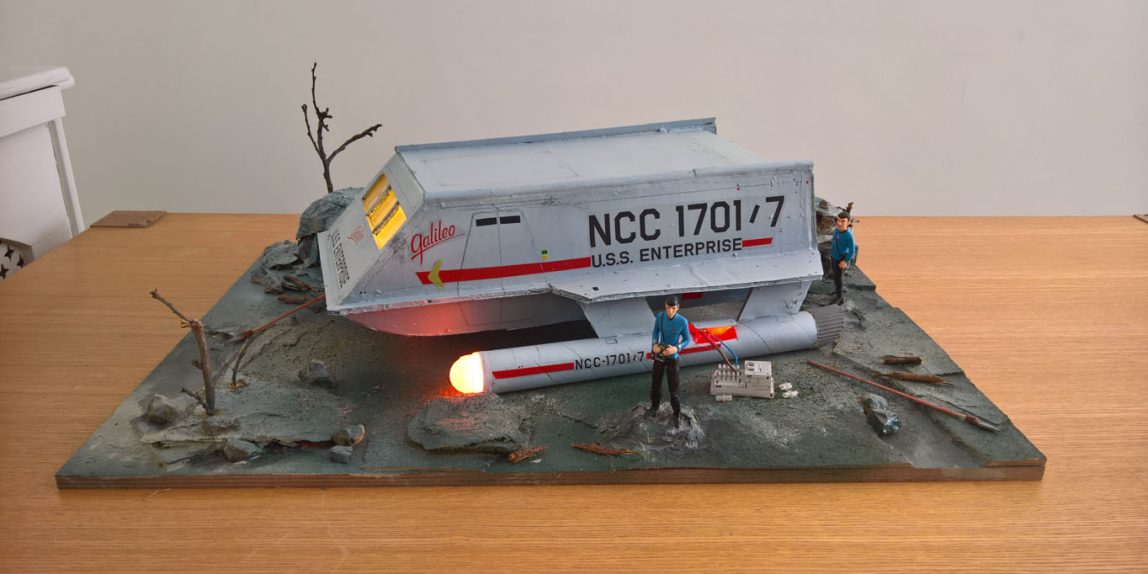 The Star Trek Galileo Seven diorama, including Spock and McCoy figures was relatively easy in comparison to previous models.

The shuttle was made entirely out of packaging card board. The interior contained printed out imagery to make sure it matched the interior of the real thing. It also contains a light and is my first standalone powered model. All lighting runs off a 9V battery underside of the model, with a switch to save the hassle of taking out the battery on every use. Seating was added using various plastic elements and the characters were printed and added inside to scale. In the end, the front window makes it difficult to make out the figures, but the effect is there.

There were two flashing light elements; one in the back and one in an opening on a nacelle. I added electronic parts to simulate repair “boxes” with wires going into the opening. The plastic nacelle ends were smaller deodorant caps.

The base was very easy to do. I had created a Skylanders landscape a few years ago for my son (never used), so I used the same technique. I used ripped MDF to create the uneven areas and either glued or screwed them into the base. I put on a heavy coat of normal vinyl silk (colour similar to magnolia) on the base and built it up using various bits and bobs, including various herbs and sand to simulate texture. Twigs and stones were used to add some more details and the whole landscape was dusted with a green spray.

I added more details, including extra twigs, plus a couple of spears to mirror the famous Star Trek episode (also called “Galileo Seven”). The final details were figures of Spock and McCoy. These were purchased from eBay, but McCoy was a slightly bigger scale than Spock. So, I used perspective and placed McCoy near the back and sideways, while Spock was head on, facing outwards. The bases were glued and blended into the background.